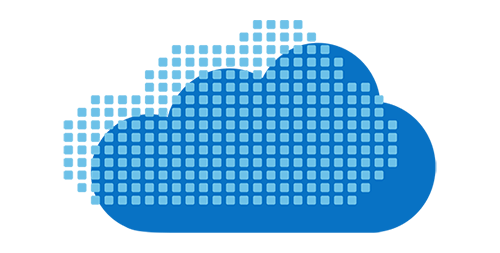 On one of my projects, I recently had to schedule a task to run in specific intervals. My current client was an early adopter of Azure and all of their applications are in the Azure Cloud. After finding out that a SQL Server Agent was not available for SQL Azure, I eventually turned to an Azure WebJob. I wanted to take a moment to write a blog about how to create, configure, deploy and stop an Azure WebJob because I felt these tasks were not intuitive. When I am unfamiliar with a technology, I like to “test it out” by creating a sample application that does a very basic job but one that is similar to what I will need it to do in Production.

I created a Azure WebJob that is scheduled to run in 30 second intervals and will insert a record into an SQL Azure Table using Fluent NHibernate. You can find the code on GitHub here 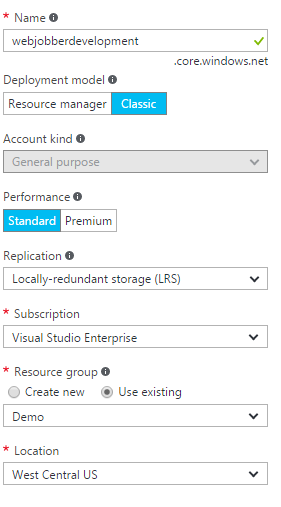 Once I had created my initial Azure artifacts, it was time to open up Visual Studio and create my WebJob.

In Visual Studio, I created a new project and under Cloud, chose Azure WebJob: 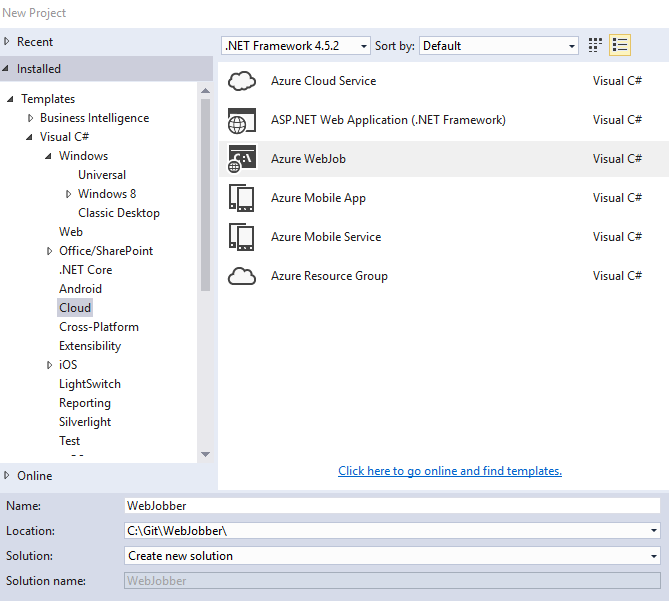 After installing Microsoft.Azure.WebJobs.Extensions NuGet Package, I created 2 Class Libraries, one that contains my “Domain” objects and another library that contains my business logic. Below is my project structure:

After this, I installed Fluent NHibernate in the Domain and Services Class Libraries. I chose Fluent NHibernate because this is what is currently being used on my project and I like to use similar tools in my sample applications.

Next, I opened up SQL Server Management Studio and in the Employee Database, created a table called “SomeJob” with two fields, one called “Id: that is an int and another called “Name” and is an nvarchar(50).

In the “Domain” class library, I created 3 classes:

NHibernateSession Class - This class is to configure Fluent NHibernate to connect to my SQL Azure Database:

SomeJob Class - This class is a code-first representation of the SomeJob Table:

When you create the WebJob, it will create a class called Functions.cs and will some base code in the Program.cs.

In the Program Class, I modified it (see comments):

In Functions.cs, I delete the ProcessQueueMessage Method that was generated and I placed my custom function here. When I first created my sample project, my function was in the Program Class as I didn’t know that it had to be in the Functions Class:

In the code above, I am passing in a TimerTrigger and I have configured the cron expression to run this function every 1 minute. When this function is called, a new record will be inserted into the SomeJob Table in SQL Azure

Now we are ready to run the application locally to make sure everything works. When you run the WebJob locally, you should see something like:

This initial output displays the 5 intervals in the future in which the WebJob will run. When the function is called, you will see something like:

Now, when I check the SomeJob Table, I should see records: 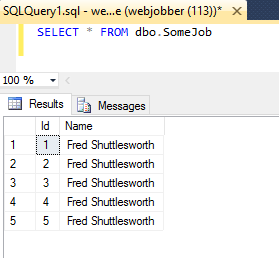 Now that I observed that the WebJob was running locally, it was time to deploy it to Azure. To deploy the WebJob you do the following:

In Visual Studio, right-click on the WebJob Project and select “Publish as Azure WebJob”

On the next screen, choose your Azure Subscription, under View, select “Resource Group” and press the “New” button:

On this screen, enter a name for your new Web App, Subscription and choose/create your Resource Group, App Service Plan and press the “Create” button: 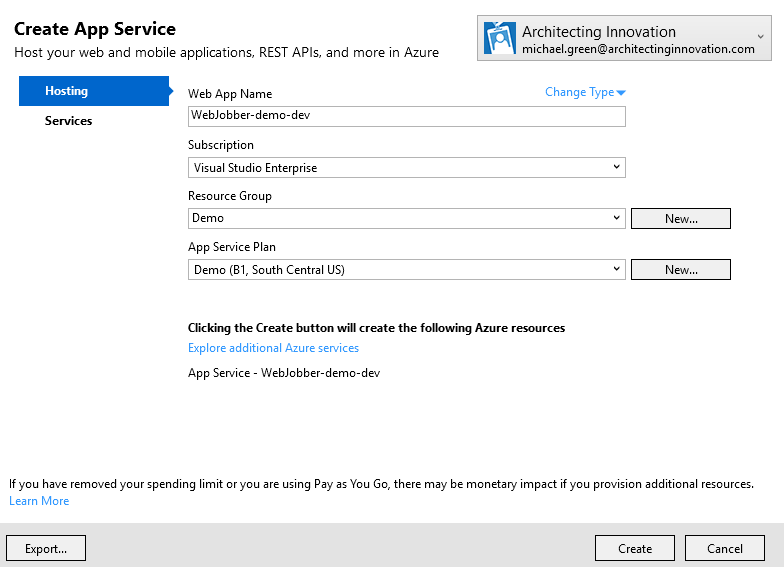 On the Connection Screen, just press “Next”: 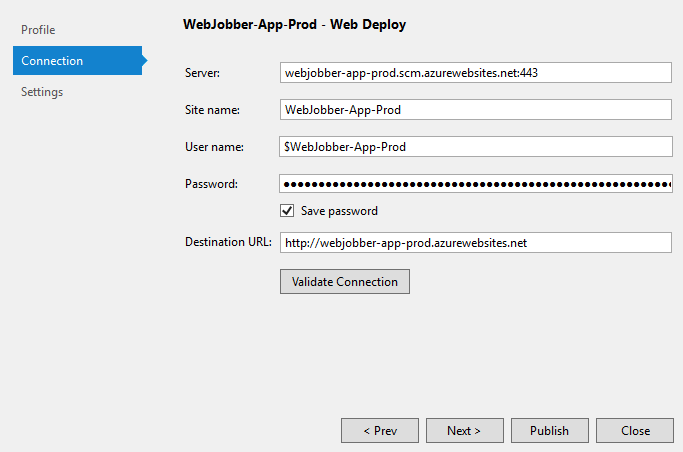 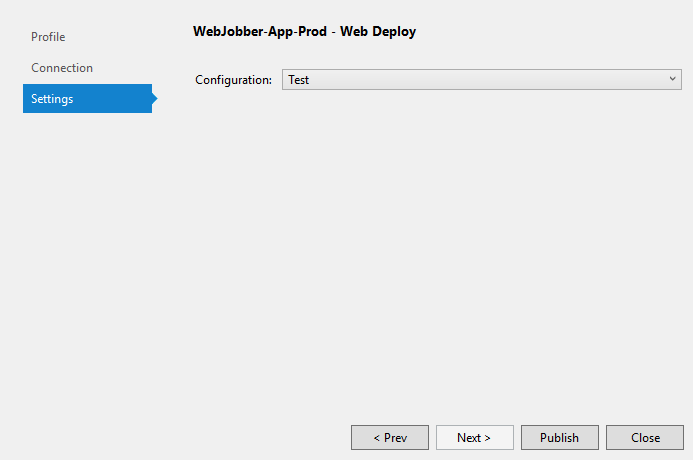 Once Visual Studio is finished publishing the WebJob, the output should look similar to the below:

To make absolutely sure that the records that are inserted into the SomeJob Table comes from my WebJob now deployed (it isn’t running yet, just deployed) to Azure, I delete all the current records in the SomeJob Table.

To start my WebJob without any issues, I had to do the following in the Azure Portal:

First, to prevent the App Pool from going to sleep after receiving no requests in a given time period, I selected the new Web App I had just created, in Application settings, under General Settings, I choose “Always On”:

After this, in the blade for the Web App, I navigated to WebJobs, selected the WebJob I had just deployed and pressed the “Run” button:

On this screen, you can drill down to view more detail about the WebJob by selecting one of the links on the page:

On this screen, hit the “Toggle Output” button to view the same information that I would see in the console window when I was running the WebJob locally:

After I did this, I observed that my SomeJob Table was indeed being populated with data roughly every minute as expected.

Edit:After this blog was created, Microsoft implemented a stop button in the Azure WebJob GUI. The section below is still relevant if you want to know how to use the Azure WebJob Process Explorer.

Once I had deployed my first WebJob, my next question was how do I stop it. There didn’t seem to be any GUI that would allow me to just stop the WebJob. I made a small code change to make the output print a certain message, re-deployed and the changes were not reflected on the Log screens. More troubling is that when I stopped the Web App, the WebJob continued to run. Not knowing any better, I decided to go with the nuclear option and just delete the WebJob. When I did this, I faced a few issues, one being, I had trouble re-starting the WebJob, once I had made changes and another issue, which I will talk about later, caused another major issue.

Eventually, I found a wonderful post on the MSDN Forums about the “Process Explorer”, which shows you all the process running for a particular Web App and more importantly, the ability to kill a process. You can get to your Web App’s Process Explorer by typing in the following:

To kill my WebJob, I pressed the “Properties” button on the row that contained my WebJob process, in this case “WebJobber.WebJob.exe” and in the popup, navigated to the bottom and pressed the “kill” button. After I did this, the Process Explorer refreshed and my process was no longer there.

When I went back to the WebJob under the WebJobs section of the Web App, I observed the following:

Now that the WebJob had been stopped, I wanted to make a small change and re-deploy. In SQL Server Management Studio, I added a new date field to my SomeJob Table, updated the SomeJob and SomeJobMap classes to reflect this change.

Once I had observed the changes were working locally, I repeated the same process I spoke of earlier to deploy the WebJob to Azure. Once deployment was complete, I went back to the Azure Portal, selected the Web App and under WebJobs, restarted the WebJob and observed that the SomeJob Table was indeed being populated: 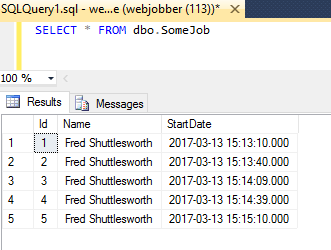 Another issue that I faced is that I couldn’t get App.Config Transformations to work using SlowCheetah.

I recently created and deployed an Azure WebJob to multiple environments for one of my clients. When I deployed to new environments, my WebJob would reference the wrong Database and Storage Accounts. I eventually discovered that the App.Config files were not being transformed by FTP’ing into the VM that hosted the WebJob and inspecting the deployed App.Config file. I tried to place the connection string values in the Azure Portal Application Settings Blade for the WebJob but this did not work either.

I ended up just creating multiple sections in my App.Config file and just manually commenting/uncommenting out the relevant values when deploying to a new environment.

« Replacing My Wordpress Blog with Angular 2 and ASP.Net Web API Part 3 I Have Finally Embraced Working From Home »