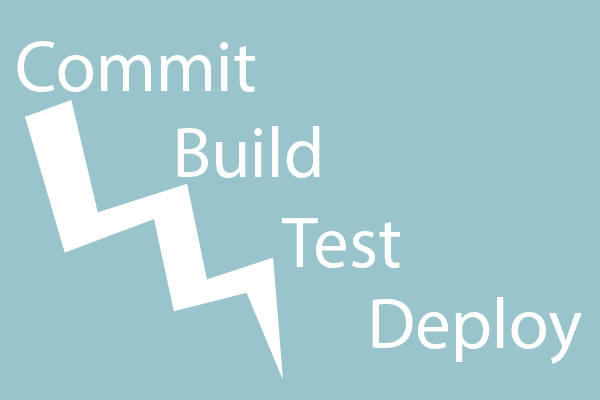 Once I converted the backend and gc-cli to .Net Core 2.0, I noticed that my TeamCity project failed. I obviously needed to fix this issue but also, I wanted to use the combined solution (.sln) so that the gc-cli and Angular 4 client components would build, along with the ASP.Net Core 2.0 backend. I decided to write a very short guide on how I accomplished this task. 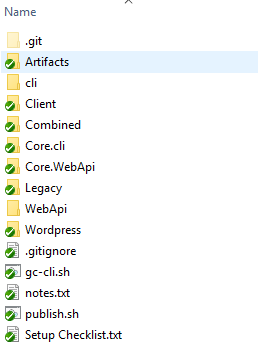 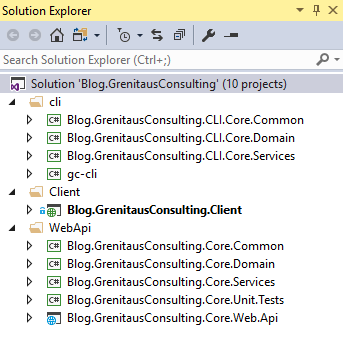 Using a command line tool such as git bash or cmd.exe, navigate to the directory that contains your .Net Core 2.0 Unit Tests and install the following packages using the dotnet-cli “add package” parameter:

First, you will need to install the Node.js Build Runner, written by Eugene Petrenko. The GitHub location, the plugin and installation guide can be found here

Next, if you are using TeamCity 2017.1 or below, you will need to install the dotnet cli plugin. TeamCity versions 2017.2+ are bundled with this plugin. The GitHub location, the plugin and installation guide can be found here

First, you will want to create a new TeamCity Project by going into Adminstration / Projects and pressing the “Create project” button.

You will then want to go to the new Project’s settings and setup the VCS Root, I am using GitHub.

After this, you will add a new Build Configuration for your Project and under Version Control Settings, press the “Attach VCS root” button and select the VCS you created under your new Project.

Next, you will want to start creating your Build Steps. 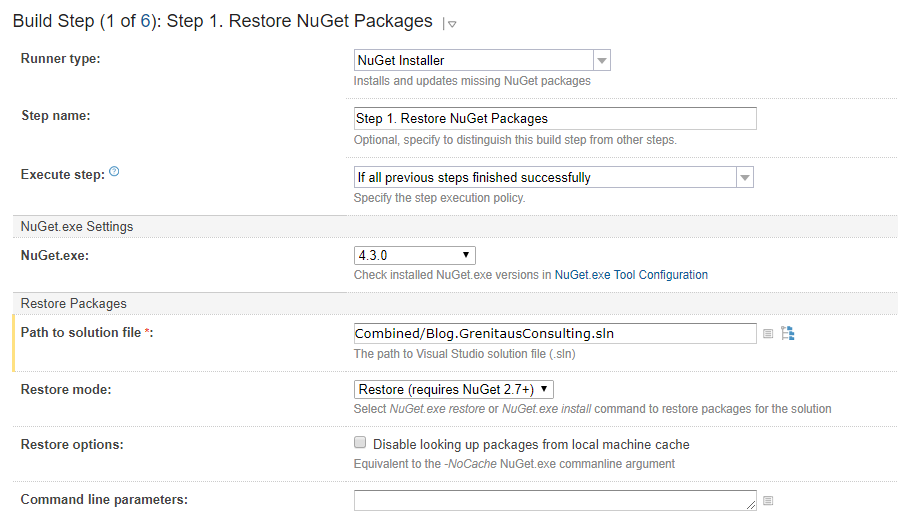 Step 2. - Run NPM (Node Package Manager). You will need this step to install the node modules your Angular 2+ application uses. 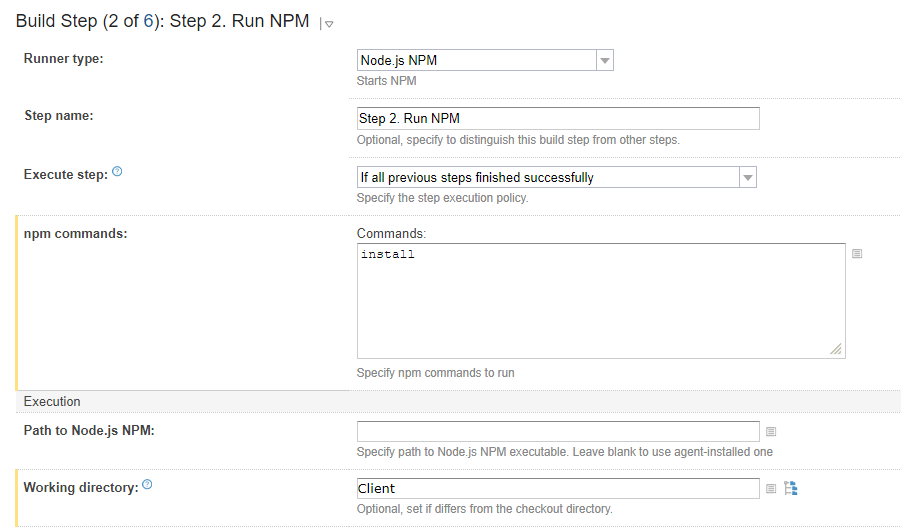 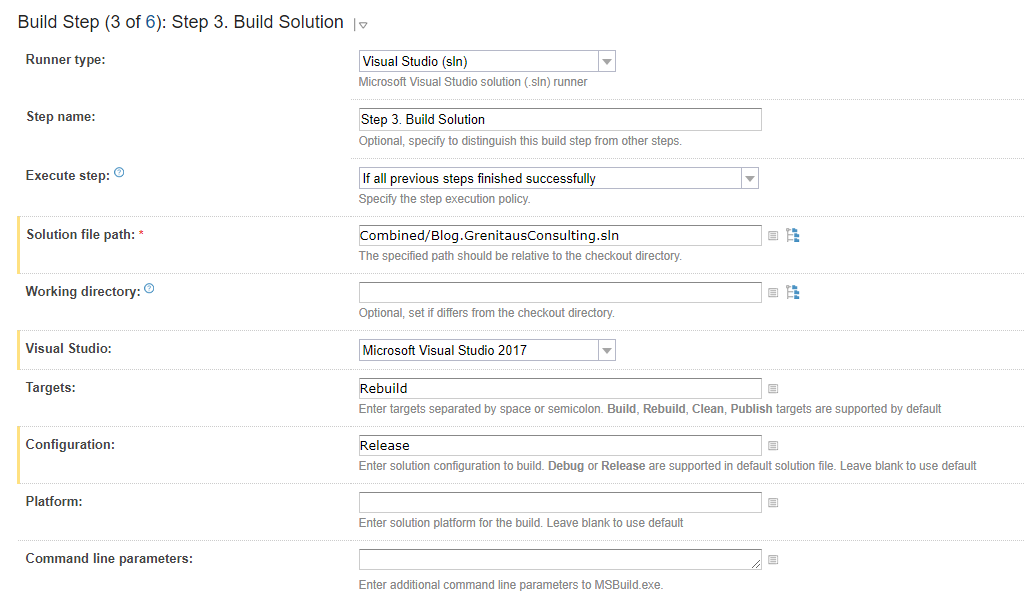 Step 4. - Run Unit Tests. In the “Projects” box, you will want to denote the location of the .Net Core 2.0 Unit Test project. Please note that I have a Step 4 and 5 to run .Net Framework Unit Tests, which is fairly straightforward and this is why the image states that it is Step 6 out of 6. 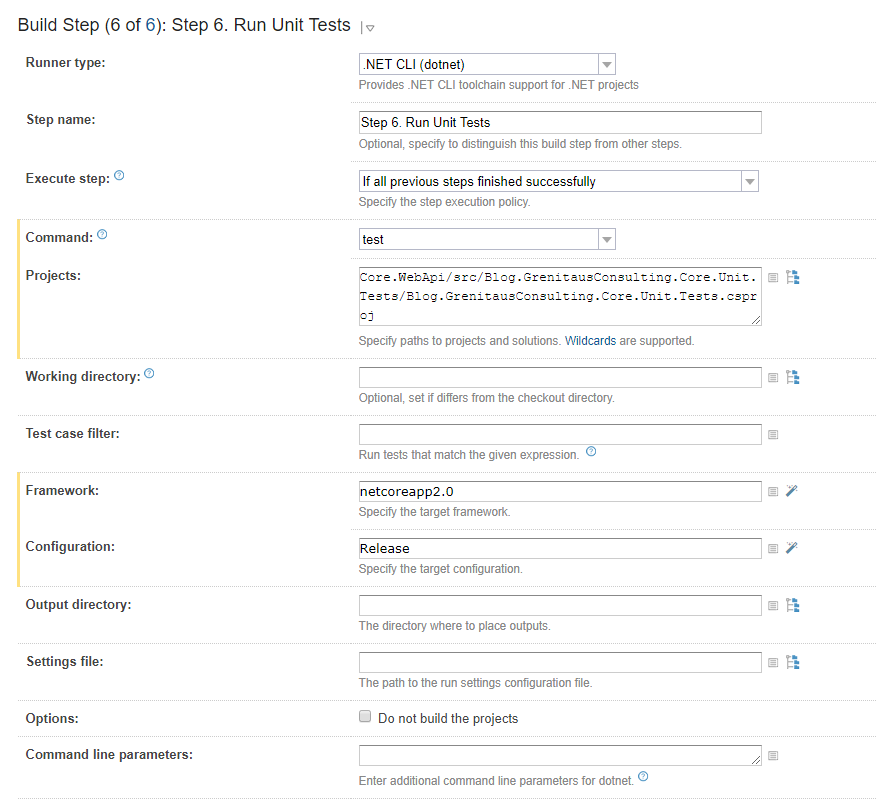 Last, you will either want to trigger a build by checking in a code change or just press the “run” button to do a manual build. The build and Unit Tests should run successfully.