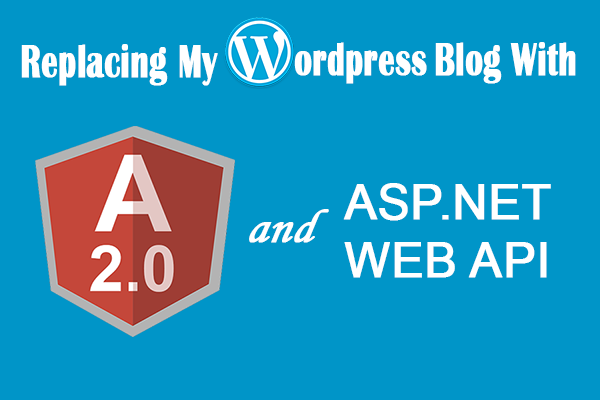 I recently decided to build upon my Angular 2 skills by ditching my Wordpress blog and writing a completely custom blog solution in Angular 2. I wanted to share my experiences in a 3 part blog series. In part 1, I will be talking about why I decided to ditch Wordpress and an overview of the Angular 2 solution.

Why did I ditch Wordpress?

The main reason why I ditched Wordpress was because it was just too slow. I started my first Wordpress site about 2 years and it was hosted with Arvixe. My Wordpress blog on Arvixe was slow and constantly timed out. A few months ago, I had enough of the timeout issues and decided to move my blog to Godaddy. My Wordpress with Godaddy never timed out but was extremely slow. My business homepage was also hosted with Godaddy and because of its simplicity, it loaded pretty fast.

Eventually, I called Godaddy to ask if there was something they could do about the slow load times with my blog and of course, they told me that there was nothing that they could do because Wordpress was just slow. The technician I talked with told me to look at some tutorials on how to make Wordpress faster. Although I was very disappointed, I took the technician’s advice and started researching ways to make Wordpress faster.

As you can see, the numbers are not very impressive and each blog post was slow until you visited the post the first time, so it could be cached and this was only temporary. Also, per Tom Dupuis’ blog, I didn’t cache any of the Wordpress Admin Pages for obvious reasons, so it was excruciatingly slow.

I started trying to learn Angular 2 last year and as I talked about in this blog, I had recently re-written my homepage to use Angular 2. Since I had already used Angular 2 for my website, it was only natural that it would be the Front-end framework of choice to help me solve my poor performing Wordpress problem.

A Checklist of Must Haves!

Before I wrote any code and committed to the project, I went about making a checklist of features that Wordpress provided that I would need in the Angular 2 solution.

When the solution was completed, I ended up with 3 major components, increased knowledge of Angular 2, Front-end development and SEO. The project took about 2.5 weeks to complete and I am very please with the end results. Here is a link to the gtmetrix snapshot after the Angular 2 and Web API solution was implemented. As you can see, the performance metrics are much improved after implementing my custom solution. Also, below is a diagram of the components I created to complete the project:

The Client - The client is the Front-end solution that uses Angular 2, Bootstrap 3, CSS and HTML5.

The Web API - The Web API exposes several Endpoints to serve up in-memory data such as Posts, HTML strings, Tags and Categories. I used Visual Studio 2015, C#, NUnit, StructureMap and Json.net to implement the Back-end solution.

gc-cli - gc-cli (gc stands for “Grenitaus Consulting”, I know, very cheesy) is a Windows Console Application that I created, which contains C# libraries that will generate Sitemaps, an RSS XML file and static HTML pages for SEO. The path to the executable was set in my Windows $PATH so I could use Bash to type in commands such as “gc-cli build -prod” to produce Production artifacts.

Over the next couple of blogs, I will be going into greater detail about these 3 components.

Even though it was incredibly frustrating at times and I probably got some new grey hairs, it was a very fun experience writing custom software to serve my blogging needs. I learned a lot about Angular 2, SEO, Front-end development, TypeScript and Single Page Applications in the process. I look forward to sharing some of my trials and tribulations in this 3 part blog series.