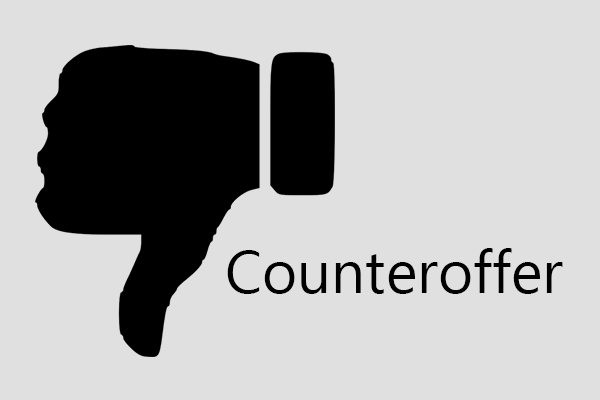 In this blog post, I wanted to discuss a few reasons why I feel that you should never accept a counteroffer when you have given your employer notice that you intend to resign from your position.

One of the toughest decisions that a person can make in their career is when they have decided that they no longer want to work for their current employer. The employee may be leaving because they feel they can no longer grow in their current position, maybe they were passed over for a promotion or they feel they can be better compensated working for another employer. Regardless of the reason an employee decides to resign their position, studies have shown that it is generally a very bad idea to accept a counteroffer from your employer, once you have a firm offer from your future employer.

I wanted to take some time to talk about why you should never accept a counteroffer and to provide some examples of how I accepted counteroffers on two different occasions and what the outcome of those decisions were.

The Problems will Remain!

One of the biggest reasons why you should never accept a counteroffer from your employer is that even though they may offer you more money or make promises that things will get better if you decide to stay, many of the reasons that made you seek new employment in the first place will remain. Several years ago, I was working for a Mortgage Lender as a mid-level developer and it was my second job out of college. I had been at this job for about 3 years, the job was boring, mundane, I wasn’t paid very well and I had been stuck with a project that used very outdated technology. I had several conversations with my boss about getting more responsibility and my concerns about working on this particular project. After my concerns continued to fall on deaf ears, I decided to seek employment elsewhere. After receiving a firm offer from another company and telling their HR person that I was definitely coming to work for them, I submitted my 2 week’s notice with my employer.

To my surprise, my supervisor asked me if there was something he could do to keep me from leaving. I was surprised, not because me and my supervisor didn’t get along but I knew that other people were leaving and my employer was not offering counteroffers. My supervisor told me that I may be going to work for a sweat shop and that I may not be happy there. I told him that the main reason I was leaving was because I was stuck on a project that I didn’t like and I didn’t have much responsibility.

Unfortunately, I let the negative doubts about starting at a new company overwhelm me and I ended up accepting the counteroffer from my employer after being told that my issues that made me want to leave in the first place would be addressed. What is absolutely crazy about my decision was that my employer’s counteroffer was less then what the new company was going to pay me. The end result was that I burned a bridge with the new employer, I was making less money, continued to work on the project I hated and the same problems that I had before I accepted the counteroffer were still there when I decided to stay. Due to the Great Recession, I ended up being laid off about 2 years later but I learned a very hard lesson, which was, whenever you decided to leave your employer, for the most part, you should never accept a counteroffer.

What’s funny is that years later, the same recruiter from this company that I had declined to go work for contacted me about a possible position with them. I wasn’t interested in the job but I did remind her of who I was and she promptly stopped communicating with me.

Another reason why it is generally a bad idea to accept a counteroffer is that you are in a way, forcing Management’s hand when you put in your notice. I do not believe it is fair, it may not be your intention but many in Management will view it this way. You may be a valuable resource and at the time you put in your notice, they may extend a counteroffer to you. However, some in Management may view you as a traitor, someone who is ungrateful and someone who forced their hand. If Management does take this view, which again, I believe is unfair, they may try to get rid of you the first chance they get.

I am reminded of a quote by Bill Parcells, the great NFL Coach and legendary motivator. He once quipped to one of his players one time, “If you are already thinking about retiring then you probably ought to retire”. I believe that if you have gotten to a point to where you are extremely dissatisfied with your employer and you have a firm offer in hand, you probably need to follow through and resign and don’t look back.

I have only accepted a counteroffer from a employer twice, one at the employer I just mentioned and another at a consulting company that I use to work for. When I joined this consulting company, I suffered from major Impostor Syndrome, undervalued myself and took a very low-ball offer. When I joined the consulting company, I did a very good job, proved myself and was being put on critical projects. Unfortunately, I started doing research on salaries and found out I was very underpaid. I had conversations with my boss, I told him I would likely accept the offer that I had in hand if something wasn’t done about my compensation and he told me that he couldn’t promise anything. He spent a lot of time telling me how great the project I was on was going to be, the technology was going to be amazing and that I would get to be a leader. He came back with a disappointing salary number and he told me to take the weekend to figure out if I was going to take his offer or go with another employer. He also told me that no matter what decision I made, just some friendly advice, ask for a lot more money next time!

After spending the weekend trying to make the best decision for me, I told my employer on Monday that I would be continuing my employment with them. Fast forward 5 days later on Friday, my boss taps me on the shoulder and tells me to come meet with him in the conference room. He informs me that I would be moving to another project. He tells me that when I told him that I was staying that I didn’t convince him enough that I was going to stay, so he had to make an “executive” decision because I was too much of a risk. Remember, one of the main selling points he made to convince me to stay was the current project I was working on and then 5 days after I decided to stay, he moves me to another project. I ended up staying at this consulting company for about 5 more months before eventually taking another position.

You have to keep in mind that employers will not waste any time getting rid of you if they have a bad quarter and they will have no loyalty towards you. You have to protect yourself and when you accept a counteroffer from your employer, you could possibly be putting yourself in the crosshairs of Management that is resentful that you forced their hand. Please don’t make the mistake I did!

The Statistics are not in your Favor!

If you decide to accept a counteroffer from your employer, you need to understand that the statistics of whether things are going to work out or not are not in your favor. Many studies have shown that 80% of the people who accept counteroffers are generally gone within a year of accepting the counteroffer. As I have demonstrated in this blog, many of the problems that forced you to seek new employment will still remain and you may be targeted by Management after you have accepted the counteroffer.

Going back to what most of us learned in grade school, it is generally a bad idea to use the word “never” and I believe the same principle applies to counteroffers. There are always going to be cases where it is in the employee’s best interest to remain with their employer and accept a counteroffer. My goal in this blog was to point out some of the reasons why I think it is a bad idea to accept a counteroffer and to share some of my experiences after I accepted a counteroffer. When deciding on whether you want to remain with your current employer or accept an offer from another company, you have to make sure you are evaluating all of the variables and most importantly, looking out for the best interest of you and your family because nobody else will do it for you.

Also, keep in mind that it is generally a good thing when 2 or more employers are competing for your talents. Try not to get too stressed out when trying to make a decision on whether or not you should accept a counteroffer and always try to put the interest of you and your family first when making the decision.